The Consumer Reports’ article “No More Suffering in Silence” is a welcome addition to the hearing-loss community, the staff at lessersoundapp.com believes.  As many of us know, the resources for the average H.I.P* and 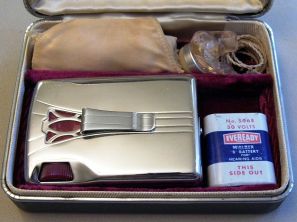 H.A.R.P.* are greatly unattainable for most in the U.S. — the number one resource being lack of information.  There just isn’t enough quality information out there.

Wayne Lesser, creator of the lessersound app, knows firsthand that hearing loss isn’t a self-contained problem.  As a young twelve-year-old boy, he watched as his sister was fitted with her first hearing aids: “a large ugly thing, about the size of a deck of cards with wires connecting the ear buds.  She was profoundly hearing impaired.”  At the time, no one thought to check his hearing.  He did the best he could throughout his education at school, struggling to hear, faking it a lot of the time.  (See Wayne’s Story.)  He knows how it can affect family members, loved ones, coworkers, and everyone else who tries to communicate with a H.I.P or H.A.R.P. person.  It contributes to a person’s happiness and well-being to be able to hear well.  Consumer Reports’ writer Julie Calderone has concerns about this as well.  “This widespread problem [hearing loss] is associated with depression, isolation, and possibly, dementia.  We report on affordable solutions and what’s being done to give everyone access to treatment.”

The National Institutes of Health (NIH) reports, “. . . about 28.8 million U.S. adults could benefit from using hearing aids.”  Consumer Reports surveyed their subscribers to see how the numbers fell.  “Almost half of the 131,686 Consumer Reports subscribers surveyed for our 2015 Annual Fall Questionnaire reported having trouble hearing in noisy environments, yet only 25 percent had their hearing checked in the previous year.  And according to research published in the Archives of Internal Medicine, just 14 percent of those who could benefit from hearing aids actually use them.”  Lesser agrees.  “There is a risk of hearing loss for everyone through exposure to loud sound who is not already hearing impaired.  People don’t understand or appreciate the substantial hazard of exposure to dangerous sound levels in their environment that causes the tiny hair cells in the ears to die.”

Calderone explains why the numbers are so high for people who need their hearing checked and haven’t bothered.  “A common one, according to National Academies of Science (NAS), President’s Council of Advisors on Science and Technology (PCAST), and others, is that they can’t afford it.  NAS reports that hearing aids cost an average of $4,700 per pair in 2013 and can climb to almost twice that price.”  That’s not taking into consideration the cost of the doctor’s visits or that hearing aids are generally not covered by insurance or Medicare.

A lower-cost alternative to hearing aids is becoming more popular in personal sound amplification products (PSAPs).  These devices can be bought over the counter without a prescription.  The cost range is anywhere from around $18 to $740.  Working similarly to the concept of a Bluetooth device, the unit fits around the ear and amplifies sound.  Unlike hearing aids, they don’t perform well in lowering feedback noise.  Consumer Reports tested four of these units with three volunteers who had mild-to-moderate hearing loss.  “We found that the higher-end PSAPs helped some of our volunteers hear better, especially while watching TV.”  (Get details on the results of our tests at “Are OTC Hearing Helpers Any Good?”)

Avoidance of loud noises is still a strong preventative measure in protecting your hearing.  The question is how loud is too loud?  With the lessersound app at lessersoundapp.com (nominated as one of the top three finalists in the 2016 Appy Awards — medical category) you won’t have to wonder if the TV is too loud or all the chatter at the local restaurant is causing your hearing to fail.  A quick, simple download to your smartphone and you’ll be ready to test the safe-to-dangerous decibels levels and see the exposure time that leads to hearing loss anywhere you go.